Welcome to the start of my reread of The Judging Eye. Click here if you the Prince of Nothing Reread! 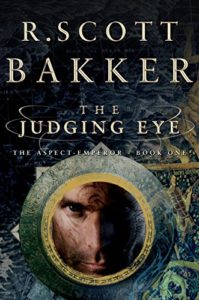 After reading the Prince of Nothing Trilogy, I needed more. It couldn’t just end there with Achamian renouncing everything and walking away from power. Yes, Kellhus had defeated the Fanim and founded his theocracy, becoming the Aspect-Emperor and reviving the Kyranean Empire of old (the very empire who’s ruler King Anaxophus used the Heron Spear to slay the No-God) and had mastered all before him, but the story wasn’t over.

What was all that stuff with the Consult? The skin-spies couldn’t have just been a plot device. The Synthese was working towards its own goals. Goals that had not been realized. The greater danger wasn’t resolved at all. It felt like we’d reached the end of a book in a series and more was to come.

But it was the end of the Prince of Nothing series.

I took to the internet. I discovered the Three Seas forums. I spent hours pouring through posts, struggling to understand the story I had just read. What had occurred between Kellhus and his father, and, most importantly to me, where was the rest of the story? What about the Second Apocalypse. Kellhus becoming emperor didn’t solve that. It was still there.

I was eager for it. Rumors abounded. There were different names for what the next series could be. Different titles for the first book. I came into the series not long after Book 3 was published. I experienced that wait for what it would be. Then the title for the series:

Spoilers came out. A time jump. A great war. Things were getting interested. We were all awaiting it. We had a title for the first book. The Judging Eye?

What did that mean? What was this Judging Eye? Nothing in the first series gave a clue. Speculation was rampant. And then it arrived. The Judging Eye was published in February of 2009 in the US. Just in time for me to lose my job delivering pizzas. I had plenty of time to read it. To dive into it. I opened that book with trembling anticipation.

SPOILER WARNING: Please read the book before any of these posts. This is intended for those who have read ALL the books. I will discuss both the events of the chapter and even their ramification for future events up to and including the Unholy Consult.

Like with the Prince of Nothing Trilogy, Bakker opens The Judging Eye with a quote. But not any from his fictional setting. He quotes the bible to start out this series. Fitting given the increased presence of religion and the Gods (specifically Yatwer and Ajokli).

But who are you, man, to answer God thus? Will what is made say to him who made it—Why have you made me this way? Does the potter not have power over his clay, to make, from the same mass, on vessel for honour, and another for dishonour?

There are so many different ways to take this verse as it relates to The Aspect-Emperor. Who is the God of this world that Bakker is exposing? Is it the Hundred, the gods who split up the souls of mankind to feast upon in the afterlife. As we learn, human souls are the wheat with which the Gods make their bread.

Is it Kellhus as he takes on the persona of a Living God and remakes the world. He shapes the nations and builds them for a purpose. He took Proyas and turned him into a cannibal only to blame him for what happened, to be a scapegoat to assuage the guilt of the survivors of the final march of the Great Ordeal upon Golgotterath. Kellhus created his empire for one purpose then allowed it to collapse once the army march. He was finished with it.

Is it the Consult and the Inchoroi who shape flesh like men shape clay? They make different beings for different purposes. Sranc, Bashrags, Wracu, Skin-Spies, and other monstrosities. They toy with lives for their own perverse amusements.

Obviously, he chose this verse a critique on religion and the remote coldness of a creator Deity. The entire series is about the pitfalls of blind faith and the irony that the only way to unite people is to give them all the same belief to embrace and in which to find comfort. Humans crave that because it gives us the illusion of safety. We project our simplified view of things upon the world. A veneer of order slathered across the chaos of nature.

Bakker is condemning the level of power such a being would have. To so casually use its creations in such a fashion. The Hundred who vie for worship so they can claim souls to feast upon, Kellhus who fashions everything for one singular purpose to realize the Thousandfold Thought, and the Consult as they bend and twist flesh itself for their own selfish needs. Even Achamian uses the Scalpers knowing they’ll die.

If the Dune series is the critique of the myth of the Great Man and the folly in following one vision, then The Second Apocalypse is that on steroids. The only way to find freedom is to have knowledge else we will all be slaves to the Darkness that Comes Before.

It’s time to begin the second chapter of this story.

It’s time to delve into The Judging Eye.

Before the prologue, we have a letter written from an unknown bureaucrat to an unnamed Exalt-Minister.

Exalt-Minister, most glorious, many be your days.

For the sing of apostasy, they were buried up to their necks in the ancient way, and stones were cast into their faces until their breathing was stopped. Three men and two women. The child recanted, even cursed his parents in the name of our glorious Aspect-Emperor. The world has lost five souls, but the Heavens have gained one, praise be the God of Gods.

The writer explains that the source of the heresy comes from them reading Drusas Achamian’s Compendium of the First Holy War. The writer goes on to say that the Heresy it contains is like a disease and must be studied to destroy. Because of that, he has and gives the three bullet points of what he considers the worst offenders that “contradict Doctrine and Scripture.”

I) Achamian had sex with Esmenet before the battle of Shimeh.

II) Achamian claiming that the “Holy Aspect-Emperor” is not an incarnation of “the God of Gods” but is a Dûnyain, a group who use their intellect to enslave mankind. “That his [Kellhus’s] Zaudunyani interpretation of Inrithism is nothing more than a tool, a means of manipulation of nations.” In short, everyone is his slave. The writer is greatly troubled by these words. He finds himself doubting his faith because Achamian wrote: “if all men lay claim to righteousness, and they do, who is to say which man claims true?”

III) The third claim is that Kellhus is not preparing war to stop the No-God. That he is not the savior of mankind but a fraud.

This is all the writer can remember. He understands the reader’s concern. Not only does Achamian’s book undermine their belief, but the man once walked at Kellhus’s side and taught him. The writer says he had his body-slave, who read the book to him, put to death and now the writer awaits his own summary judgment, writing: “It is our doom to suffer the consequences of our acts, regardless of the piety of our intentions.”

Some pollution begs not the cloth, but the knife; this I accept and understand.

The child condemning his parents reminds me of the Hitler Youth and how they were encouraged to inform even on their own parents. They were convinced that an ideology was more important than familial bonds, just like Kellhus wants. He needs to unite mankind.

A body-slave reading for a person was not uncommon. There is a history of slaves being educated and reading for illiterate masters or for those whose age has weakened their eyesight. The Ottoman empire employed slaves to run their government, serving as their bureaucracy.

We see the fanaticism of the Zaudunyani interpretation of Inrithism through the author, how blasphemers have to be put to death to keep this disease from spreading and how even the author expects to die. Kellhus and his ministry understand that ideas are as virulent as a pestilence. They can take root in a population and cause downfall. It has to be rooted out.

Finally, this letter serves as a quick reminder of what Achamian’s motivations and beliefs are. He lost his wife to Kellhus, that Kellhus isn’t a god but a Dûnyain, and that we can’t trust Kellhus’s motivations in his war against the Consult. It’s a great way to set the stage for the series we’re about to read.

Right from the start, Bakker puts the ultimate narrative question before us: Can we trust Kellhus not to betray mankind like a proper Dûnyain would? It’s been twenty years. Has his assessment changed? Is he leading the Great Ordeal to their slaughter?

Other books try to make the readers question if one of the main characters has become a threat. It can be hard to pull off for a character you feel like you know and wouldn’t do that. Bakker pulled it off in this series.

Onward to the Prologue!

If you enjoyed this, continue on to the Prologue!

Hi, if you like my Analysis, you can connect with me on Facebook and Twitter, and you can pre-order my first fantasy novel, Above the Storm, from Amazon or purchase my short story collection! Also,  please leave any comments or criticisms below! They help keep me motivated!