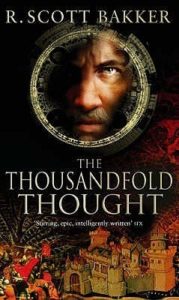 I was hooked after the Warrior Prophet. That ending was insane. I wanted to know about the Consult, about the Dûnyain. I wanted to find out what would happen. I wanted Achamian and Esmenet to get back together even while realizing that would never happen. I was still well immersed in my awe for Kellhus. I hadn’t taken the time to really think about him as a character and how utterly horrifying he and the Dûnyain were.

So while The Thousandfold Thought didn’t answer a lot of the greater questions about the series (though its appendices was very informative about the history), it left me reeling. I had to understand what I just read. It was so different from other fantasies. And it didn’t end complete. I mean, the Holy War came to its conclusion, but what about the Consult and its machinations? Was the Second Apocalypse going to happen?

So I was thrilled to hit the internet and discover the fan community. To learn that this was only “Book 1” of a trilogy. That more was coming, I just needed to be patient. Already, the Judging Eye had been announced, though I recall it having a different name once upon a time. I just had to wait. A veteran of The Wheel of Time, I knew how to do it.

Obsess over details. To theorize. To dissect. To come and understand this universe. This whole reread series wouldn’t exist if it wasn’t for that obsessive need to understand Bakker’s world. The fact that he creates such a lived-in and unique fantasy setting, so hinging on philosophy, drove me to learn, to question. If Bakker’s skill was less, this series easily would be a confusing mess that no one would care about.

But it was built with love and care. The more I studied, the more certain of that fact I became. It had a message. It had meaning. If you could peel it away, it made you think about your own life, to question your own decisions.

The events are brutal. They’re not fair. But then life is never fair. Despite how much us humans may wish it, how we may bend and contort ourselves to fit this fiction that it could ever be possible, that’s just not the way the world is. We lie to ourselves to protect us from the true darkness that comes before us all.

Let’s embark upon The Thousandfold Thought, the conclusion of the Prince of Nothing Trilogy.

SPOILOR WARNING: Please read the book before any of these posts. This is intended for those who have read ALL the books. I will discuss both the events of the chapter and even their ramification for future events up to and including the Unholy Consult.

Like with the first two books, Bakker opens The Thousandfold Thought with two quotes that aren’t from his own fictitious setting, but from the real world.

In pursuing yonder what they have lost, the encounter only the nothing they have. In order not to lose touch with the everyday dreariness in which, as irremediable realists, they are at home, they adapt the meaning they revel in to the meaninglessness they flee. The worthless magic is nothing other than the worthless existence it lights up.

All progression from a higher to a lower order are marked by ruins and mystery and a residue of nameless rage. So. Here are the dead fathers.

Bakker strikes to the core of his series with the first quote. If humans don’t understand why they do the things they do, then it is utterly meaningless. And yet they are happy in it. They revel in it because it is their home. But does it therefore have any worth? And anything that springs from it must be as worthless as the source. But if they understand what they have lost and try to reclaim it, they can do something with true purpose.

And this leads us into the other quote about how decay and entropy break things down. Those who come after always feeling like they are lesser than those who came before. This leaves them with bewilderment which drives an anger they can’t even understand, a “nameless” rage.

This implies a cycle of a culture or a group achieving something and then losing it without understanding what they had because they don’t truly know what they lost. They don’t understand themselves. On generation builds and the other allows it to breakdown helpless to stop it but feeling that impotent rage as they struggle to as they heap new meaning upon the old, rendering it meaningless.

On and on and on.

And that is how Bakker sets the stage as two cultures reach their final clash in the Thousandfold Thoughts. Inrithism and Fanimry collide and one is cast down and destroyed by those who don’t truly understand what they are doing or why they are driven to these acts of brutality.

All except Anasûrimbor Kellhus. The Warrior Prophet channels all of their actions, but it will be into something that is ultimately meaningful? It’s hard to say since in the end, Kellhus fails. His Great Ordeal undone by his own son. It shall fall upon lesser people to in the final third of the series.

People who are as blind to the darkness that comes before as any other world-born.

Let’s embark upon The Thousandfold Thought!

If you haven’t gotten bored yet, click her for Chapter One.