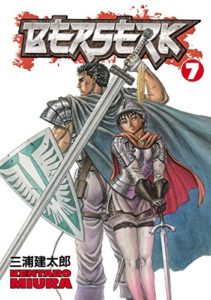 Guts and Caska have been separated from the rest of the Band of the Hawk, swept down river after Caska’s collapse. Being a soldier is hard enough without the added burdens of PMS, and Caska isn’t at one hundred percent. That doesn’t matter as the bellicose lord Guts injured has put out a bounty on the pair.

An company of mercenaries, over a hundred strong, are sweeping through the woods. Caska and Guts will have to fight back to back to survive. Right now, Caska can’t afford to be a woman. She needs to be a soldier. A sword for Griffith. Will they survive?

This manga continues Caska’s story of young girl sold into sexual slavery to warrior who seized her own destiny in hand and defended her virtue from her would-be rapist. Now once again she has to fight to protect not only herself, but the one person in the Band of the Hawks she cannot stand.

The one person in the Band of the Hawks that Griffith cares for.

The character building in this volume is amazing, from showing us the humanity of Griffith as he faces the cost of his dream, to the realization that though he’ll sacrifice even his own body to see it through, he won’t stop. Even if means causing more death and suffering. The parallels drawn by Miura are amazing.

The art as always continues to be great and detailed. The characters all have personality. The violence is gritty but particularly satisfying in this volume. Miura has given us some great characters to loath in Corbowitz and his men while leaving us on a cliffhanger.

BERSKER continues to shine! It is one of the best Fantasy (and definitely among the greats of Grimdark Fantasy) on the market. Even if you’re not a fan of manga (graphic novels), you have to check out this amazing work.

You can buy BERSERK Vol 7 from Amazon.